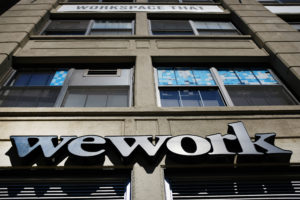 NEW YORK, NEW YORK – MARCH 26: The co-working space WeWork stands in the Williamsburg neighborhood in Brooklyn on March 26, 2019 in New York City. WeWork, which lets freelancers and other non-traditional workers to become members in a shared or flexible office space, has expanded globally over the last year but continues to suffer large losses. While in 2018 WeWork saw a more than doubling of its sales to $1.82 billion from a year earlier, the company’s losses over that same period also more than doubled to $1.93 billion. (Photo by Spencer Platt/Getty Images)