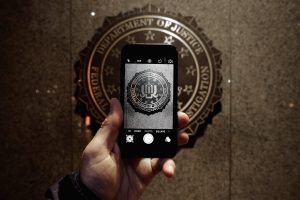 WASHINGTON, DC – FEBRUARY 23: The official seal of the Federal Bureau of Investigation is seen on an iPhone’s camera screen outside the J. Edgar Hoover headquarters February 23, 2016 in Washington, DC. Last week a federal judge ordered Apple to write software that would allow law enforcement agencies investigating the December 2, 2015 terrorist attack in San Bernardino, California, to hack into one of the attacker’s iPhone. Apple is fighting the order, saying it would create a way for hackers, foreign governments, and other nefarious groups to invade its customers’ privacy. (Photo by Chip Somodevilla/Getty Images)